I was introduced to fried gnocchi at Le Maceo restaurant in Paris last October and it was so dazzlingly delicious that I was keen to make my own version.  I’ve never returned to its plainer-boiled cousin!

Gnocchi can be accompanied by many different sauces – it is incredibly versatile.  I’ve chosen spinach, but a simple fresh basil and tomato sauce is delicious too.

For this recipe,  local fresh spinach was out of season, so I’ve used frozen instead.  All ingredients are from my local independent greengrocer. 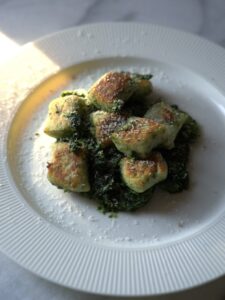